Grief makes us uncomfortable. Being face to face with someone else’s intense sadness is really hard. In my life, people feel doubly awkward because my child had cancer and died. There are two subjects that make people painfully uncomfortable. No one knows what to say or do, so many people follow the “I’m sorry” up with “my (insert relative or friend or random acquaintance) has/had cancer”. While yes, that matters and it’s terrible that anyone had to fight such a horrible disease . . . it’s just not helpful to compare an adult who fought and survived or even fought and died to someone’s child.

That in no way means I don’t care about other people and their struggles and losses. If anything, I’m MORE compassionate for loss and suffering now. I see the need for compassion and encouragement everywhere. I constantly think, I wonder what that stranger next to me is going through.

I also completely understand that when you’re hit with “my child died” it makes people uncomfortable and they are trying to show you they care or that you’re not alone because they know someone who had cancer and died.

Before we started walking this road, I’ve known several people who have lost children and you don’t know what to say so I filled it in with:

“I have a friend whose daughter died.”

“I lost my (insert person) so I get your pain.”

ALL of those things are valid and sweet things to say and no one is terrible for saying them. Our instinct is to ease people’s pain because it makes us uncomfortable—it’s 100 percent normal and human. BUT to be completely honest—which I’ve promised to be since Sophie was diagnosed—now that I’m on this side of it . . . it’s just not helpful.

It makes me feel like I need to stop in the middle of my grief to be sad for an adult who lived a much longer life than my baby. Again, I’m not saying I don’t care about others and their pain or that my pain is more important.

It’s just that when someone is sharing their grief with you, it’s OK to just listen and not try to take their mind off of it with a story of another.

It’s OK to say nothing.

It’s OK to start crying because what I just said shocked you and broke your heart.

It’s OK to grab my hand and just sit in silence.

My child fought, faced every worst case scenario imaginable, and then died. Something terrible and broken happened and there’s no “good” response. Just be there to listen. You don’t know how to help even though you desperately want to, but . . . we don’t need help. Nothing you can do or say will fix the grief, but feeling loved and not alone can make a bad day a little better.

Just be there to listen . . . because that’s what we need. 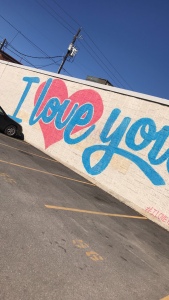 Originally published on Her View From Home https://herviewfromhome.com/its-ok-to-just-listen/